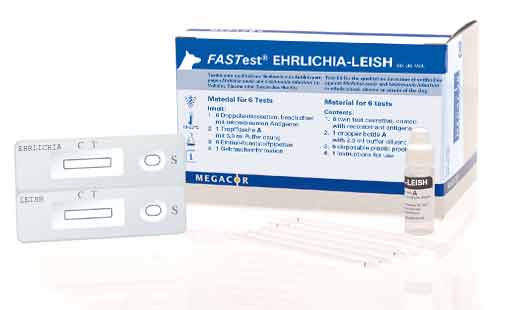 FASTest® EHRLICHIA-LEISH is a rapid immunochromatographic test for the qualitative detection of antibodies against Ehrlichia canis and Leishmania infantum in whole blood, plasma or serum of the dog.

Both the canine Leishmaniosis (Leishmania infantum) and the canine monocytic Ehrlichiosis (CME, Ehrlichia canis) count among the most important vector-transmitted infectious diseases / travel diseases of the dog. Coinfections play a major role, because these dogs are more likely to become ill. In the literature, there are hints that an upstream Ehrlichia infection possibly sensitizes for a Leishmania infection.

The seroprevalences for the Ehrlichiosis and Leishmaniosis vary strongly depending on country (endemic or non-endemic) and study. In addition, indigenous infections in dogs with symptoms of canine Leishmaniosis, but without a travel report, are increasingly being described in non-endemic areas (e.g. Germany).

The canine Ehrlichiosis is characterized by a very long incubation period (Ø 4–5 to 12–13 years) and a non-specific clinic and is therefore also referred to as “silent killer”!

The consequences of such coinfection from an immunological, therapeutic and diagnostic point of view are known to very few veterinarians. Therefore, FASTest® EHRLICHIA-LEISH is useful as rapid qualitative antibody detection test in dogs suspected of having leishmaniosis, ehrlichiosis or a coinfection. 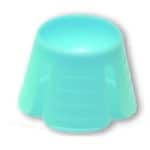 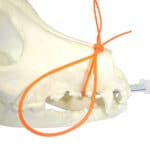