Serum amyloid A protein (SAA) has been identified as a major acute phase protein in humans and several veterinary species including the horse and cats. SAA is a sensitive but unspecific marker for inflammation.

In several studies, the equine acute phase protein SAA has been identified as a rapidly responding and very sensitive marker of inflammation that increases several hundred-fold during infectious and non-infectious inflammation, and which peaks 36 to 48 hours after injury. After resolution of disease serum SAA concentrations decrease very quickly, thus closely reflecting recovery due to the short plasma half-life of the SAA protein.

SAA is well suited not only for diagnosing the presence of inflammation, but also for real-time monitoring of inflammatory changes in disease states and responses to therapy.

Measurement of SAA has been shown to be particularly useful in differentiating between infectious and non-infectious diseases that cause weakness in neonatal foals. Remarkably high levels of SAA have been detected in foals with sepsis or localized infections, while SAA levels in foals with non-infectious causes of weakness have been reported to be in the normal range, or just marginally elevated.

As SAA is more sensitive in detecting inflammation (compared to CBC and fibrinogen), earlier detection and monitoring of inflammatory processes would assist in earlier treatment and prognostication.

Bioscint is pleased to inform you that our partner Randoz Veterinary has released the VeraSTAT-V, a convenient stable-side device designed to detect the earliest signs of inflammation.

The VeraSTAT-V measures levels of Serum Amyloid A (SAA), the fastest blood marker to rise in response to inflammation, quickly and accurately.

Working examples include monitoring potential inflammatory injuries of a competition horse which has undergone a rigorous training schedule, while high levels of SAA have been detected in foals with sepsis or localised infections, allowing for the early detection of any abnormalities. 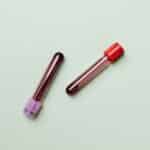